Because I had so much fun designing SweeperVS, I decided to turn my attention to another classic. Although there are many multiplayer versions of the game in question, most of them separate the players between different playing fields. In contrast, I wanted to have more direct competition by having them share a single one. But this resulted in an interesting challenge regarding the game ending condition: It was either too easy to play destructively and force the other player to loose by blocking his active block, or a player could end the game at will when having the lead.

Besides a two player competitive mode for local play, I also added a singleplayer mode. Field size, block colors and the optional preview can be configured via the options menu. This game was never finished however, since I decided to work on a cooperative take on the original formula instead (using a different programming language this time). 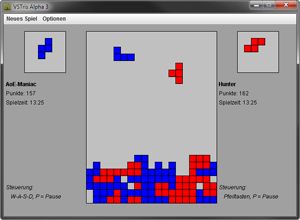 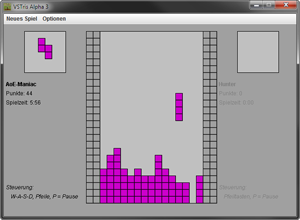