I always admired the clever concept behind Typing of the Dead, which allowed players to improve their typing skills while playing. Regretfully there are far to few games which followed up on that idea, and there are even less which allow players to compete against others using only your typing skills.

Since I heard lots of good things about the StarCraft II editor, which supports not only maps but completely new games (as long as the players own the original game), I also wanted to give the editor a try. This lead to the idea of bulding a simple typing-based strategy game which can be played competitively by two players. It is based on the principle that each player builds units by typing a randomly choosen word. The opponent is then able to kill this unit by typing the exact same word. If he is not fast enough and the unit reaches his home base, he loses some health.

Stronger units have longer words attached to them, mirroring longer construction times (on the attacker's side) and more health (on the defender's side). However, these advanced units can only be build if the player upgrades his base by typing a longer sentence, which also increases the health of the base but requires him to pause his attacking / defending efforts momentarily.

After playing some rounds with the initial prototype, it became clear that it was extremely dependent on the player's typing skills and that it only lasted more than a minute when played by very similarily skilled players. This lead to the decision to not elaborate it further. However, I might follow up on this idea in the future with a cooperative concept involving balancing mechanisms for differently skilled players, maybe also using a technology which is more accessible for players. 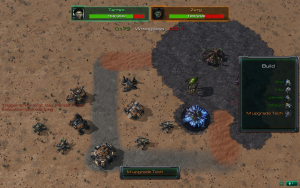 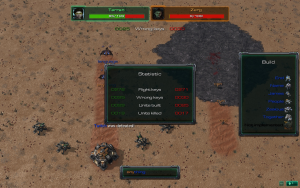 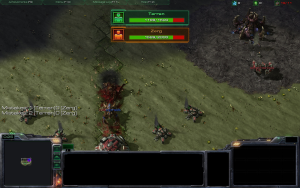