Getting more and more into Kha I was really looking forward to using it at the Global Game Jam. Since it is more of an SDK then a full-fledged game engine we prepared some basic functionality (also called Khajak or Kha Jam Kit) like .obj-file loading and rendering as well as a particle system in advance.

During the idea phase we quickly became interested in doing a boat racing game for two players, which allowed my partner to implement a water simulation he read about some time ago and me to experiment with boat physics. Fortunately it was easy to integrate the actual topic "Ritual" as a narrative justification for the race.

Development went very smooth, even the creation of the most complex 3D objects I have made so far. Our game was fully playable after one day, giving us plenty of time to work on the details. Working on the tutorial with one day left felt pretty surreal, since that was something we normally did in the last minute or even had to skip. I also think that the unusual movement (physics based rowing with bumper and trigger) was the first time we had a simple, but also engaging core mechanic. Tying the strenght of each stroke to the delay between hitting bumper and trigger added depth, and mastering this timing was a deciding factor in our test matches.

Developed together with Robert Konrad. 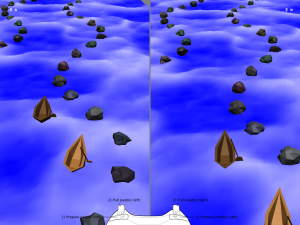