A (hopefully humorous) text adventure game developed for the Ludum Dare 30 game jam, which is written as a dialog between the player and the player character. The topic of the jam was "connected worlds", so we build a game that connectes all other game(world)s created at our location. Every game has it's own location with puzzles based on objects taken from their world. At a certain point in each world the player character encourages the player to play the referenced game in order to give him some time - which must be proven by a keyword.

The idea to build a technically simple game for this game jam worked out great and allowed us to spend most of the time on dialog writing and puzzle design with some spare time for testing. Therefore we could add all the features we wanted and even finished a refinded version based on the testers feedback during the jam. Additionally, this is my first game that is designed to work on mobile devices (Android).

Developed together with Max Maag and Bernd Bohmeier. 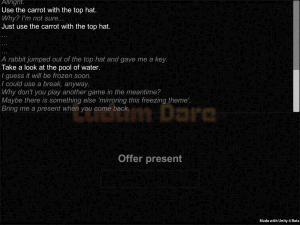