This game was developed for the Ludum Dare 27 game jam, which had the theme "10 Seconds". It is set in a (randomly generated) maze-like space ship filled with aliens, from which the player must rescue his fellow crew members. The theme is incorporated by the fact that the ship's scanners (i.e. the minimap) are malfunctioning and therefore only update every ten seconds. This way the player has to anticipate enemy movement as well as memorize his own position to prevent running into an enemy behind the next corner. The resulting time frame of uncertainty is meant to create tension, which increases with the time elapsed since the last update.

I am very proud of the result, especially because it was the first game jam entry for everyone on my team. However, we learned quite a few lessons along the way, including that one should never forget to plan appropriately - especially under tight time constraints. 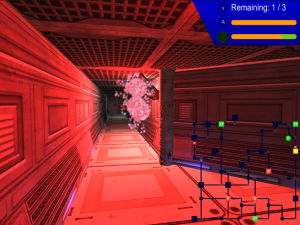 Enemy in a hallway 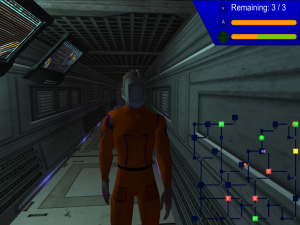 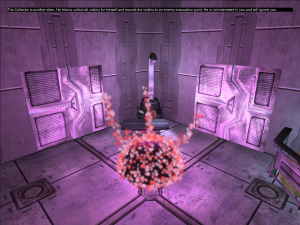 Enemy collector as shown in the tutorial